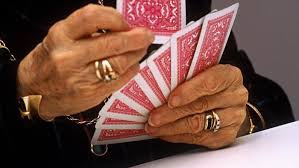 Although it's not absolutely necessary to understand the scoring of a bridge match it does help considerably during the bidding stages of play. It also helps when it comes to filling in score cards or the traveler. The scoring is essentially the same for all forms of the game although in bridge tournaments the results are collated and turned into match points.

The objective of each bidding sequence is to bid and make game for which you need to score 100 points.

In all forms of the game the scoring is as follows:

It can be seen from the above that making five tricks in clubs or diamonds would give the player 100 points which is what you need to score to make a game. It also follows that four tricks in hearts or spades would result in a score of 120 which again, is enough for game. You only need three tricks in no trumps to make 100 points and therefore game. When you make game you get bonus points of either 300 or 500 depending upon your vulnerability.

In duplicate bridge the players "contract" to make a certain number of tricks with a particular trump suit or no trumps but if they make more tricks than they state, they get points for every extra one. At the same time, all players are trying to bid up to game contract (i.e. 3NT, 4H or 4S, 5C or 5D). It therefore follows that each side's job is to force the opponents to bid higher whilst keeping their bidding level as low as possible unless game can be bid.