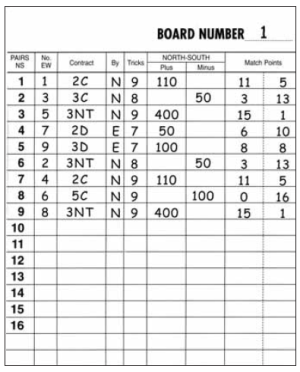 At the end of a tournament all the travellers are collated together by the scorer. There will be a completed traveller for each board. Each board is scored separately and is an entity in it's own right which means if you have a disaster on one board, the worst score will score badly only on that board. Contrast this with Contract bridge where it's easily possible to score in the hundreds or even thousands during one rubber from which you would be unlikely to recover.

As an example take pair one, North South, on this traveller Scoring 110 they are better than pairs 2, 4, 5, 6 and 8 and equal to pair 7. They would receive two points for playing against pairs 2, 4, 5, 6 and 8 and one point for their match against pair 7. This gives them 11 match points and this figure is entered in the next to right hand column with a complementary score being given to the East West pairs, in this case 5, entered in the extreme right hand column.

After matchpointing all the travellers in a tournament the scores for every pair on each board are recorded and totaled to produce a separate result for the NS and EW pairs. The highest score is known as a "top" and the lowest a "bottom".

In practice nowadays scores are entered into a computer and the results given as a percentage. 50% is obviously an average session whilst 60% is reckoned to be good and 70% brilliant. Usually 62%, 63% will win a tournament.

Here is a much simpler explanation of match point scoring taken from an actual game at Raunds Bridge Club.