I just had to put this on the website as it demonstrates the strange things that can happen in the game of bridge. This is from the James Bond book, Moonraker although I think it was changed to a Canasta game for the film. The deal is shown below. 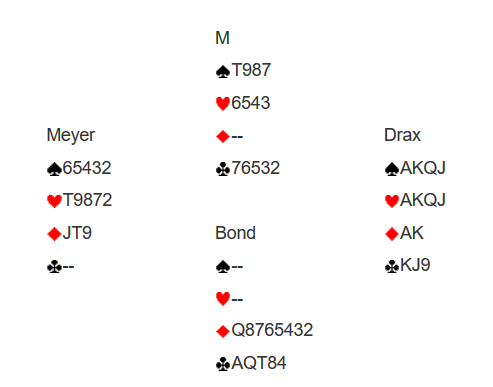 James bond is partnering M against arch villain Drax and his partner Meyer. Being Bond he was able to magically swap the real pack of cards for a pack he had secreted away earlier as one does:-) There is a lot of money at stake on this hand and Drax, sitting East opens the bidding at 6 No Trumps. Bond, sitting South overcalls with 7 clubs! When the bidding gets to Drax he obviously doubles. Bond, as you might expect, redoubles.

Bond ruffs the diamond lead in dummy and then finesses the clubs. Following that, he ruffs another diamond in dummy and finesses clubs again. Every card in Bond's hand is now a winner and Drax has to pay up.

On any other lead, (hearts or spades), Bond would ruff in his own hand and then cross to Dummy with a diamond ruff where he would finesse the clubs as before.